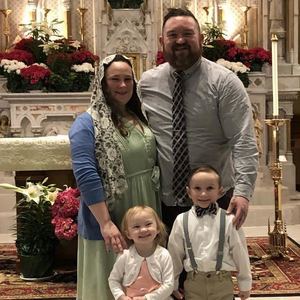 Adam is a Catholic speaker, youth minister, and ministry developer. He co-founded of Nameless Ministries, which helps churches center on a real relationship with Jesus and the Church while also helping their ministers recharge batteries. Kate often refers to him as her “Handsome, holy, hilarious husband.” Kate has served in the Jesuit Volunteer Corps, worked as a social media marketing manager and at a crisis pregnancy center, has taught in the classroom with the most trying of the most trying (middle schoolers), escaped the system, and rules Twitter with her holy and challenging feminism. She says we all should be feminists and recently posted a video of her daughter chanting that we should smash the patriarchy. Oh, Kate also veils at Mass and Adam is covered in the sweetest tattoos you’ve ever seen.